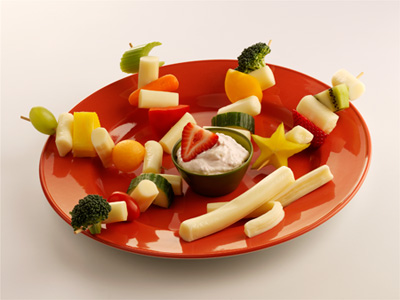 How should cheese be stored?
Wisconsin cheese should be refrigerated at temperatures of 35 to 40 degrees F in the original wrapping until ready to use. You should store cheese out of the airflow in the cooler to prevent flavor contamination. If the original wrap is removed, rewrap the cheese tightly with plastic film wrap or foil to prevent air pockets. Once the cheese is exposed to air, mold and dehydration may occur. To protect the cheese from mold, always work with it in a clean area. It will keep better if rewrapped with new plastic wrap after each time opened. To be extra cautious, double-wrap the cheese or place it back in its original container or a sealed container, if possible. Strong-smelling cheeses like Limburger should be well-wrapped and kept in a separate container to prevent odors from transferring to other foods.

How long is it safe to keep cheese?
Soft cheeses should be eaten soon after purchasing. As a general rule, the harder the cheese, the longer it will remain fresh. But remember, natural cheese will continue to ripen, no matter how carefully it is stored. Hard cheeses will generally keep for several months, whereas softer cheese will keep from one to three weeks after opening, if stored in an airtight container. In addition, large pieces of cheese tend to keep longer that shredded cheeses. Processed cheese slices are best if used within six months when stored in the original package at a constant 32 degrees F. Opened packages rewrapped tightly and stored between 30 degrees F and 40 degrees F are best if used within three to four weeks. Frozen packages opened and rewrapped tightly, and stored a 0 degrees F or below, are best if used within six to eight weeks. The best if used by date is intended to tell you how long the product will retain best flavor or quality. The term is not a safety date. Best used by dates are intended as useful guidelines. Some foods may deteriorate more quickly and other foods may last longer than the times suggested. A number of factors can shorten the useful life of a food product, such as improper handling and inadequate storage. Food products may be consumed after the best used by date if the product has been properly stored and handled.

Can I freeze cheese?
Most cheeses should not be frozen. Ice crystals can damage the structural integrity, and thawing can release moisture and condensation that diminish flavor, texture and appearance.

Why is string cheese stringy?
Because it's made using a process called pasta filata, which means the curds are heated in water or whey until they form strings (hence the term "string cheese") and become elastic in texture.

What is mozzarella cheese?
Mozzarella cheese is a sliceable curd cheese originating in Italy. Mozzarella is not aged like most cheeses and is actually best when eaten within hours of its making.