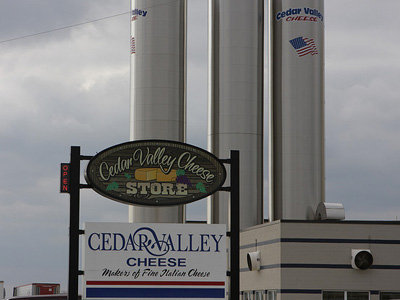 The cheese plant is located at the junction of Hwy. 57 and Jay Road, just south of the village of Random Lake. That original modest plant remains the cornerstone for today's modern facility.

Jeff Hiller, president and third-generation owner, has significantly grown the company since taking over ownership in 1988. Currently the company manufactures more than 36 million pounds of cheese annually.

Cedar Valley Cheese receives milk daily from more than 140 local farmers throughout eight counties. The company processes more than 1,200,000 pounds (or 141,000 gallons) of milk daily to make the cheese. It takes 18,500 cows to produce this amount of milk. The factory has six huge stainless steel milk silos; each silo holds 60,000 gallons of milk.

More than 1,500 gallons of sweet cream are produced daily. The butter made from this is available for purchase in the Cheese Store.

Twenty-three semis carry whey (the by-product of cheese making) to a processing plant each day.

Cedar Valley Cheese has received the Seal of Excellence Award at the State Fair five times for its string cheese. The company also received a red ribbon on their Provolone and Mozzarella cheeses.

Recent expansions, new equipment, automation, cold and dry storage facilities and dedicated employees have made it possible for Cedar Valley Cheese to survive during these changing times. In the 1950s, there were cheese plants at almost every intersection in the county. Today, only a handful of family-owned cheese companies remain.